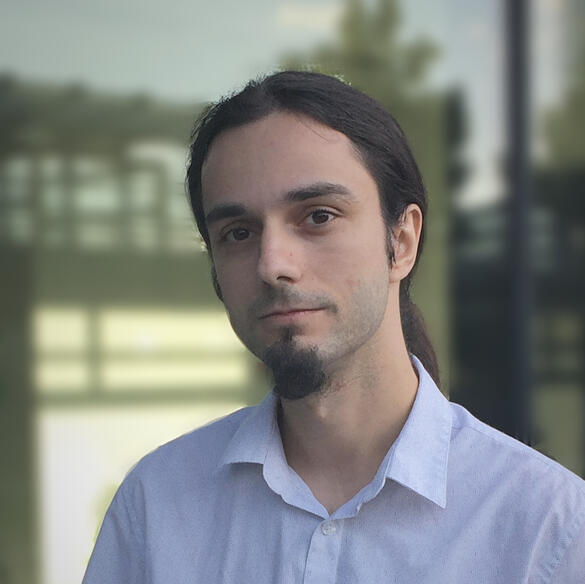 A researcher bridging the fields of computer vision, graphics and human-computer interaction

My name is Ivan Nikolov. I was born in the little town of Vratsa, Bulgaria. I got my bachelor's degree from the Technical University of Sofia in the field of Computer Engineering. I moved to Denmark, together with my girlfriend to study at Aalborg University. There I completed my master's degree in Vision, Graphics, and Interactive Systems.
I got my Computer Engineering Ph.D. in 2020 and currently working as a postdoc at Aalborg University in the field of computer vision, 3D reconstruction, and robotics.

I also have interests in computer graphics, interactive systems, VR and AR, as well as game development. Statistics and data visualization are my second nature.
Interested? Get in touch!

I am open to new opportunities for work and collaboration, as well as consultancy.

With the introduction of new specialized hardware, Virtual Reality (VR) has gained more and more popularity in recent years. VR is particularly immersive if suitable auditory and haptic feedback is provided to users. Many proposed forms of haptic feedback require custom hardware components that are often bulky, costly, and/or require lengthy setup times. We explored the possibility of using the built-in vibrotactile feedback of HTC Vive controllers to simulate the sensation of interacting with surfaces with varying degrees of roughness. We conducted initial testing on the proposed system, which shows promising results as users could accurately and within short time discern the amount of roughness of 3D models based on the vibrotactile feedback alone. 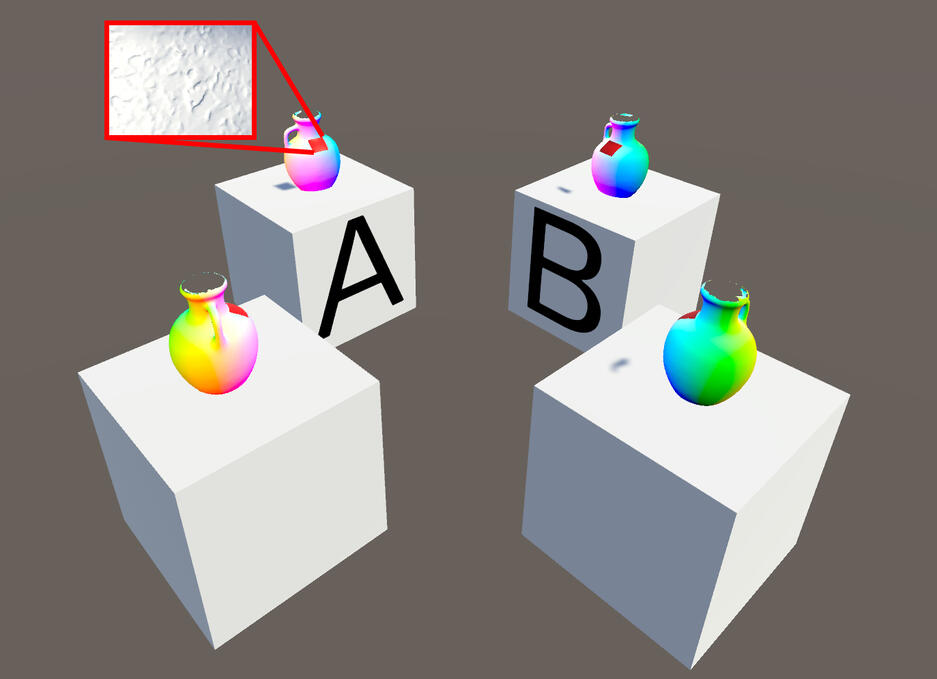 In recent years 3D reconstruction has become an important part of the manufacturing industry, product design,digital cultural heritage preservation, etc. Structure from Motion (SfM) is widely adopted, since it does not require specialized hardware and easily scales with the size of the scanned object. However, one of the drawbacks of SfM is the initial time and resource investment required for setting up a proper scanning environment and equipment, such as proper lighting and camera, number of images, the need of green screen, etc, as well as to determine if an object can be scanned successfully. This is why we propose a simple solution for approximating the whole capturing process. This way users can test fast and effortlessly different capturing setups.We introduce a visual indicator on how much of the scanned object is captured with each image in our environment, giving users a better idea of how many images would be needed. We compare the 3D reconstructioncreated from images from our solution, with ones ated from rendered images using Autodesk Maya and V-Ray. We demonstrate that we provide comparable reconstruction accuracy at a fraction of the time.

Virtual reality (VR) has become an important tool for providing immersive and collaborative teleprensence experiences. The technology has the possibility of bringing people in different geographical places together in an immersive way and makes sharing knowledge, ideas and experience easier. An important evolution in the immersive experience is the introduction of items from the real world into the virtual environment and the creation of a mixed reality experience. We present a pilot study in the use of the built-in head mounted display (HMD) cameras, for capturing parts of the environment and presenting them in VR. Particular emphasis is put on capturing physical written content on flat surfaces and visualizing it in VR for sharing with other users. We test the HTC Vive and Valve Index cameras and compare them to two external solutions by applying optical character recognition (OCR) on captured... 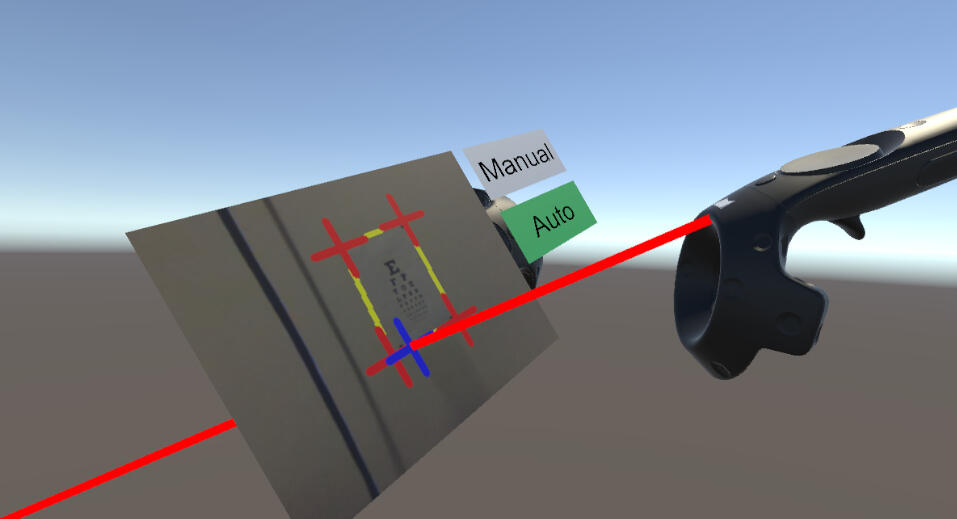 Visualization of large scale 3D models has become an important part of the development cycle in many fields like building design, machine design, construction and many more. Whether for design communication or demonstration, it is necessary for the viewers to fully understand the different components of the model, their proportions compared to each other and the overall design. A variety of augmented reality (AR) applications have been created for overall visualization of large scale models. For tours inside 3D renderings of models many immersive virtual reality (VR) applications exist. Both types of applications have their limitation, omitting either important details in the AR case or the full picture in the case of VR. This paper presents a low-cost way to demonstrate models using a hybrid virtual environment system (HVE), combining virtual reality and augmented reality visualization. The solution is built using a fully occlusive head mounted display (HMD), together with off-the-shelf web cameras and a game controller for interaction.

Preliminary Study on the Influence of Visual Cues, Transitional Environments and Tactile Augmentation on the Perception of Scale in VR 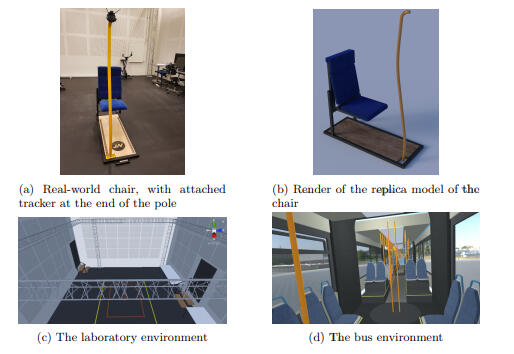 Modelling of Clouds from a Hemispherical Image

This paper presents an image-based method for modelling clouds. Unlike previous image-based approaches, a hemispherical photograph is used as input, enabling to consider an entire sky instead of merely a portion. Our method computes the intensity and opacity of the clouds from the photograph. For this purpose, beforehand, the sun illumination is filtered, the pixels are classified between cloud and sky pixels, and the sky behind the clouds is reconstructed. After having been smoothed, the intensity of the clouds is used to create vertices on a hemisphere, and their radius coordinate is modulated by the intensity value of the corresponding pixel. Finally, the mesh is generated by triangulation of the vertices. Additionally, the use of the opacity of the clouds to simulate their transparency and render them is proposed. The results show that our method can be used to produce a realistic full sky populated...

Structure from Motion 3D reconstruction has become widely used in recent years in a number of fields such as industrial surface inspection, archeology, cultural heritage preservation and geomapping. A number of software solutions have been released using variations of this technique. In this paper we analyse the state of the art of these software applications, by comparing the resultant 3D meshes qualitatively and quantitatively. We propose a number of testing scenarios using different lighting conditions, camera positions and image acquisition methods for the best in-depth analysis and discuss the results, the overall performance and the problems present in each software. We employ distance and roughness metrics for evaluating the final reconstruction results.

Rough or Noisy? Metrics for Noise Estimation in SfM Reconstructions

Structure from Motion (SfM) can produce highly detailed 3D reconstructions, but distinguishing real surface roughness from reconstruction noise and geometric inaccuracies has always been a difficult problem to solve. Existing SfM commercial solutions achieve noise removal by a combination of aggressive global smoothing and the reconstructed texture for smaller details, which is a subpar solution when the results are used for surface inspection. Other noise estimation and removal algorithms do not take advantage of all the additional data connected with SfM. We propose a number of geometrical and statistical metrics for noise assessment, based on both the reconstructed object and the capturing camera setup. We test the correlation of each of the metrics to the presence of noise on reconstructed surfaces and demonstrate that classical supervised learning methods, trained with these metrics can be used to distinguish between noise and roughness with an accuracy above 85%, with an additional 5–6% performance coming from the capturing setup metrics... 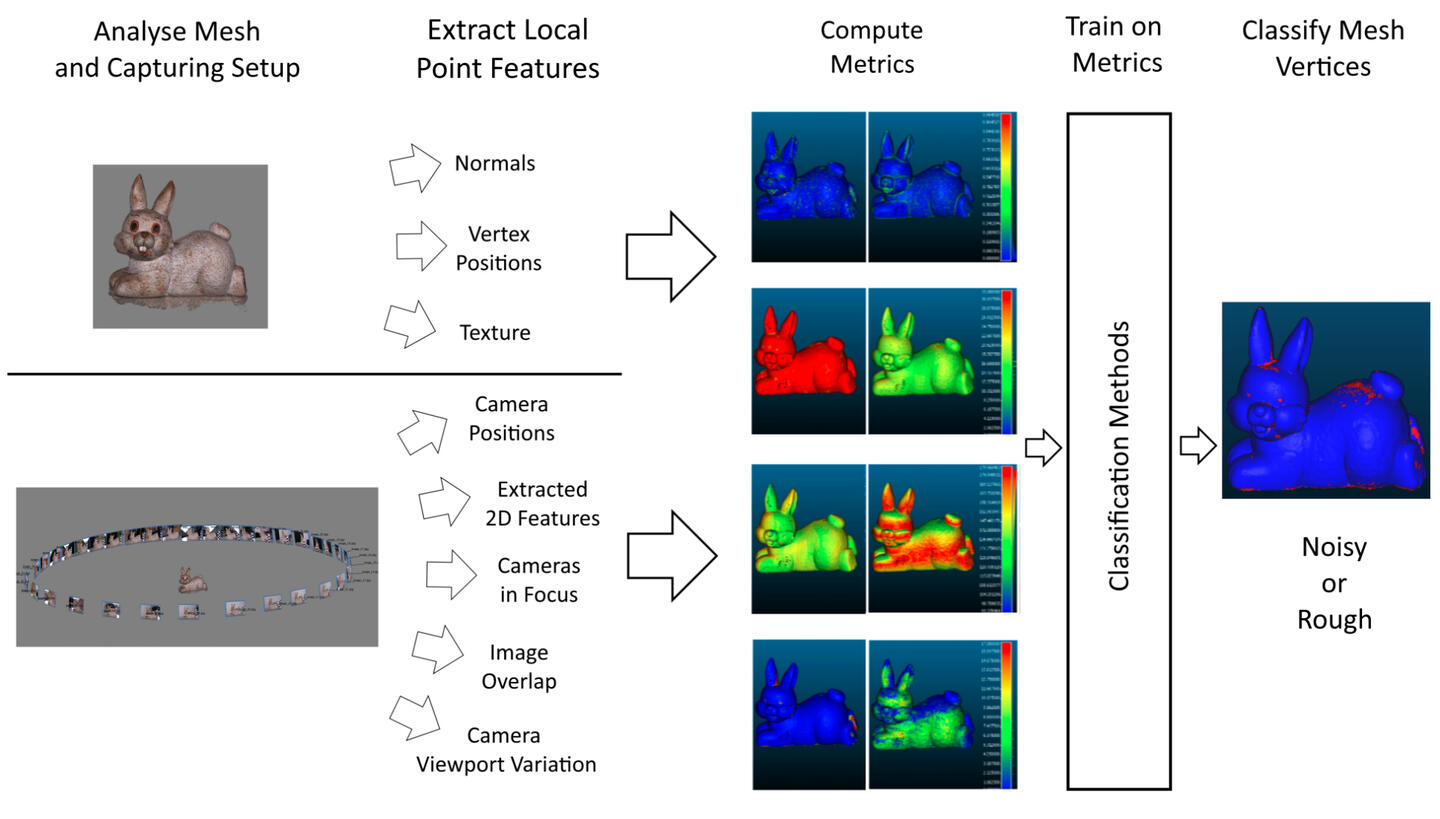 One of the time consuming tasks in the timber industry is the manually measurement of features of wood stacks. Such features include, but are not limited to, the number of the logs in a stack, their diameters distribution, and their volumes. Computer vision techniques have recently been used for solving this real-world industrial application. Such techniques are facing many challenges as the task is usually performed in outdoor, uncontrolled, environments. Furthermore, the logs can vary in texture and they can be occluded by different obstacles. These all make the segmentation of the wood logs a difficult task. Graph-cut has shown to be good enough for such a segmentation. However, it is hard to find proper graph weights. This is exactly the contribution of this paper to propose a method for setting the weights of the graph. To do so, we use Circular Hough Transform (CHT) for obtaining information about the foreand background regions of a stack image, and then use this together with a Local Circularity Measure (LCM) to modify the weights of the graph to segment the wood logs from the rest of the image... 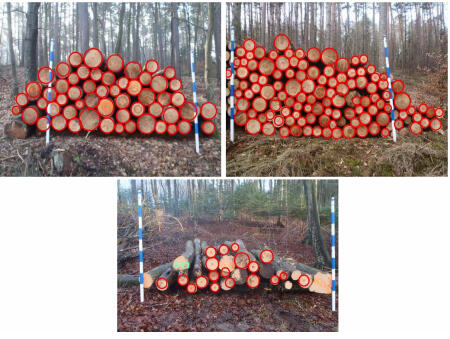 The wind energy sector faces a constant need for annual inspections of wind turbine blades for damage, erosion and cracks. These inspections are an important part of the wind turbine life cycle and can be very costly and hazardous to specialists. This has led to the use of automated drone inspections and the need for accurate, robust and inexpensive systems for localization of drones relative to the wing. Due to the lack of visual and geometrical features on the wind turbine blade, conventional SLAM algorithms have a limited use. We propose a cost-effective, easy to implement and extend system for on-site outdoor localization and mapping in low feature environment using the inexpensive RPLIDAR and an 9-DOF IMU. Our algorithm geometrically simplifies the wind turbine blade 2D cross-section to an elliptical model and uses it for distance and shape correction... 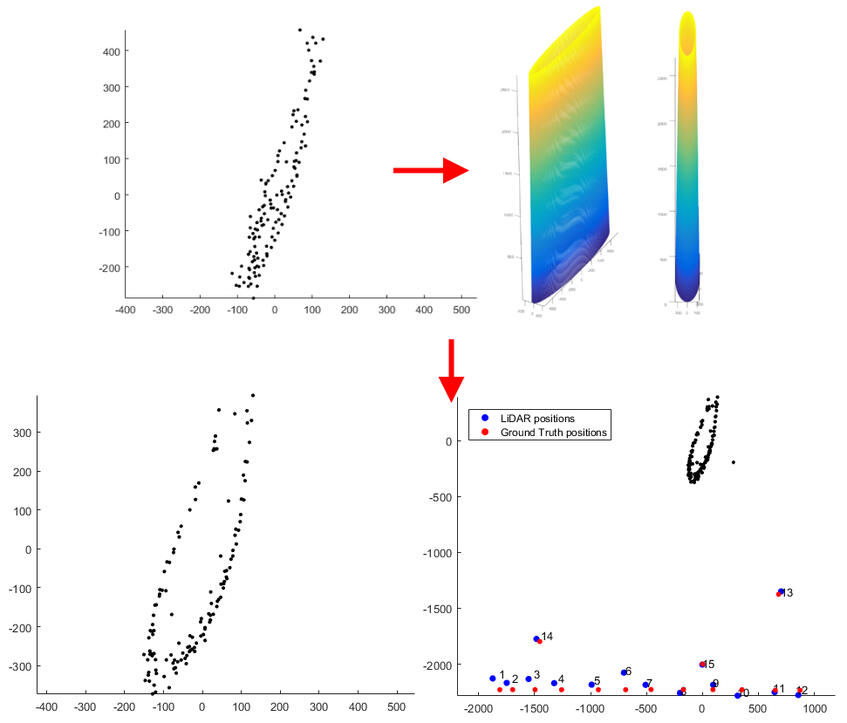 Structure from Motion (SfM) 3D reconstruction of objects and environments has become a go-to process, when detailed digitization and visualization is needed in the energy and production industry, medicine, culture and media. A successful reconstruction must properly capture the 3D information and it must scale everything to the correct scale. SfM has an inherent ambivalence to the scale of the scanned objects, so additional data is needed. In this paper we propose a lightweight solution for computation of absolute scale of 3D reconstructions by using only a real-time kinematic (RTK) GPS, in comparison to other custom solutions, which require multiple sensor fusion. Additionally, our solution estimates the noise sensitivity of the calculated scale, depending on the precision of the positioning sensor. We first test our solution with synthetic data to find how the results depend on changes to the capturing setup...

Capturing details of objects and surfaces using structure from motion (SfM) 3D reconstruction has become an important part of data gathering in geomapping, medicine, cultural heritage, and the energy and production industries. One inherent problem with SfM, due to its reliance on 2D images, is the ambiguity of the reconstruction's scale. Absolute scale can be calculated by using the data from additional sensors. This chapter demonstrates how distance sensors can be used to calculate the scale of a reconstructed object. In addition, the authors demonstrate that the uncertainty of the calculated scale can be computed and how it depends on the precision of the used sensors. The provided methods are straightforward and easy to integrate into the workflow of commercial SfM solutions.

Over time, erosion of the leading edge of wind turbine blades increases the leading-edge roughness (LER). This may reduce the aerodynamic performance of the blade and hence the annual energy production of the wind turbine. As early detection is key for cost-effective maintenance, inspection methods are needed to quantify the LER of the blade. The aim of this proof-of-principle study is to determine whether high-resolution Structure-from-Motion (SfM) has the sufficient resolution and accuracy for quantitative inspection of LER. SfM provides 3D reconstruction of an object geometry using overlapping images of the object acquired with an RGB camera. Using information of the camera positions and orientations, absolute scale of the reconstruction can be achieved. Combined with a UAV platform, SfM has the potential for remote blade inspections with a reduced downtime. The tip of a decommissioned blade with an artificially enhanced erosion was used for the measurements... 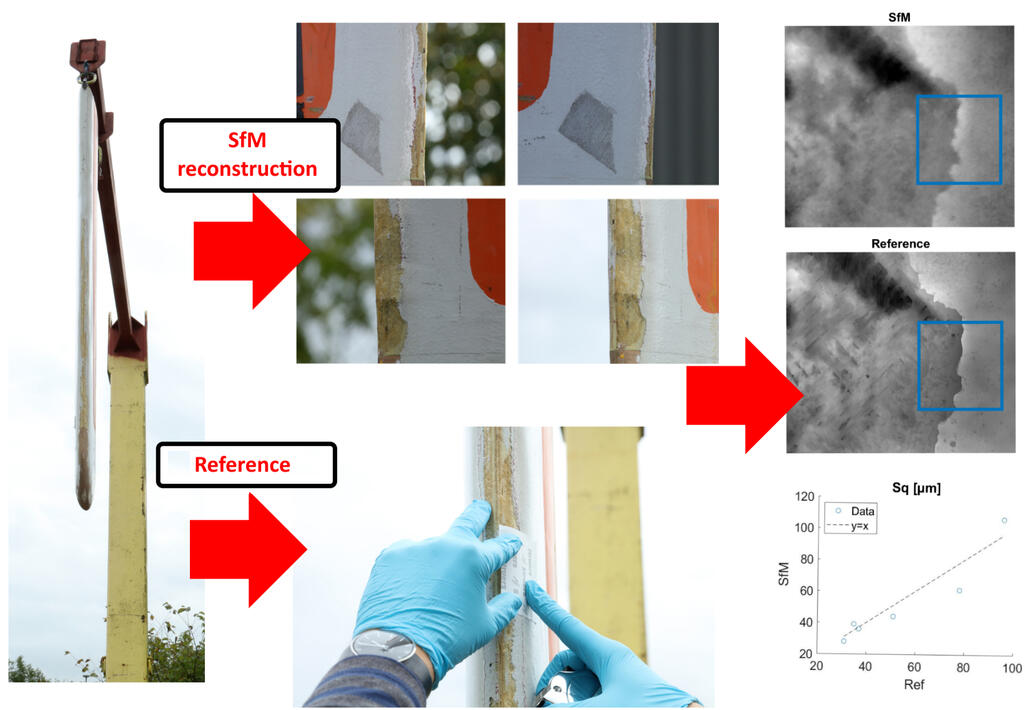 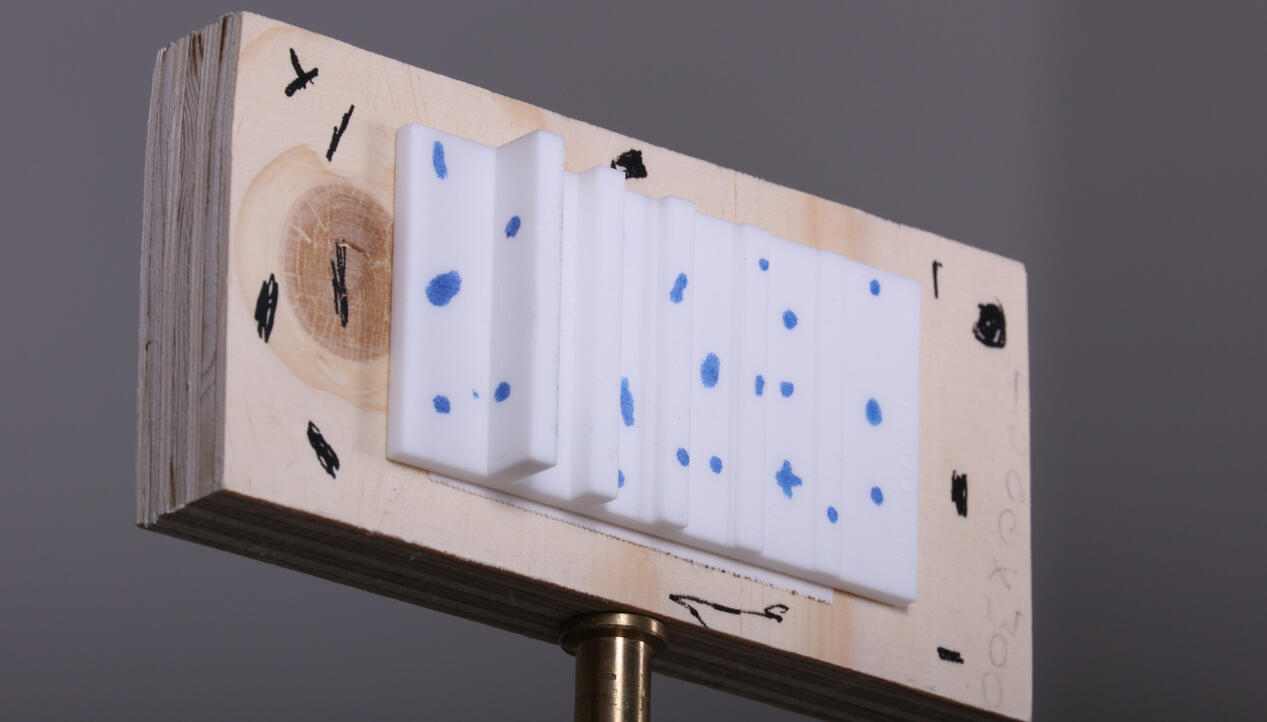 An educational game, made for explaining the government pandemic response of closing and opening infrastructure for limiting infection spread 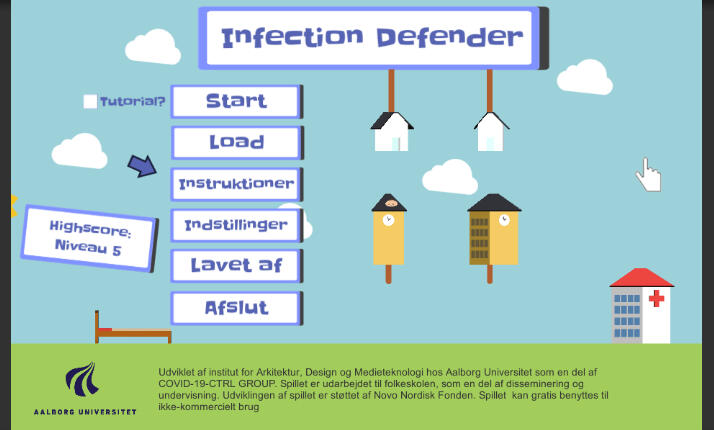 An educational game, made to put people in the shoes of a law maker at a time of pandemic - choosing what to close and when, so people can get through it

A Unity based mesh annotation tool